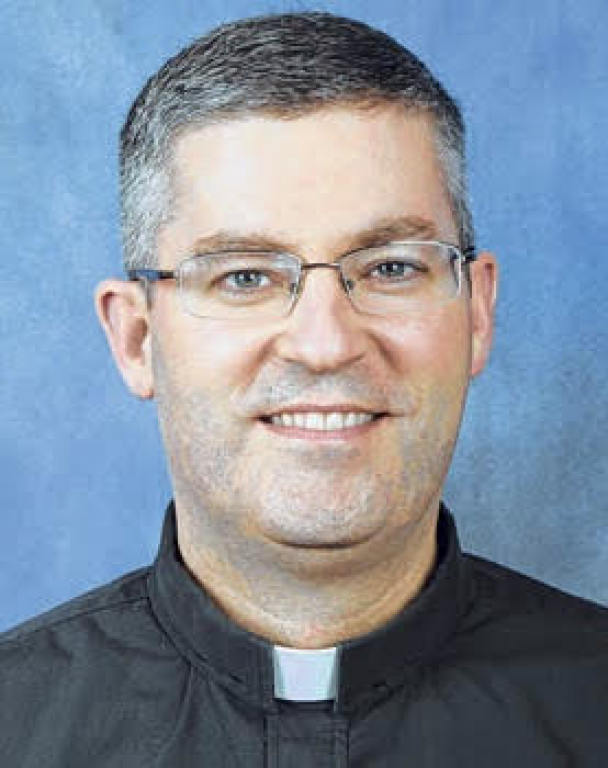 Father Mark was born and raised in Buffalo, and is the sixth of eight children. After graduating from the University of Buffalo in 1998, he attended the Cleveland-Marshall School of Law, and there found his heart moved to respond to the Lord’s call to serve as a priest. Fr. Mark thinks being a parish priest is a privilege beyond words, and he seeks to serve the people of our community with his entire self. In addition to doing the obvious things a priest does, like celebrating Mass and hearing confessions, Fr. Mark really enjoys visiting the sick, having opportunities to teach, and doing all the little things that go into building a strong parish and school.

He plays the guitar, loves to read and learn new things, is a die-hard fan of the Bills and Sabres, and he feels very blessed to come from a large family. His favorite quote is from a commentary on the life of the great Saint, Maria Goretti, it is this: “In the struggle for the Kingdom, the little ones advance the line.”

He says his life belongs first and foremost to Mary, our Blessed Mother, and daily entrusts all things to her.

The road to the priesthood took Transitional Deacon Lukasz Kopala from Poland to the United States four years ago where he spent a pastoral year at St. Vincent de Paul Parish in Niagara Falls and was ordained by Bishop Richard J. Malone at St. Joseph Cathedral in Buffalo on June 6th.

Father Kopala, recently celebrated his 35th birthday, taught religious education to sixth-grade students at Catholic Academy of Niagara Falls, where he shared stories of his life in Poland, talked about the importance of vocations and was involved with youth ministry. He participated in St. Vincent de Paul's RCIA program for adults interested in becoming new members of the Catholic Church. He also preached at daily Masses, gave homilies at weekend Masses once a month and participated in weddings, baptisms and funeral arrangements.

Learn more about Father Lukasz from the WNY Catholic articles...

Official notification from Bishop Malone was received that Deacon Don Weigel has been assigned to our Parish as a permanent deacon!  We will begin to see Deacon Don at weekend Masses beginning on Sunday, September 6th.  As he and his wife become members of the parish, please give them a warm welcome.   We are certainly blessed to have Deacon Don join us in service and ministry with the many gifts and talents that he brings with him.

Deacon Don Weigel was ordained to the Permanent Diaconate on May 29, 2010. He has been married to his wife Kathy for 40 years, and they have three grown children and two grandsons.  He received his Masters degree in Theology in 2009 from Christ the King Seminary as part of his preparation for the Diaconate.  Deacon Don is currently assigned to the Public Policy department of Catholic Charities, where, among other responsibilities, he publishes the “Justice Update” newsletter. He has recently been named a “Global Fellow” by Catholic Relief Services, being commissioned to preach the CRS vision of a just world to help end global poverty. He currently writes a monthly column in the Western New York Catholic called “Justice Perspective” and has given numerous presentations on social justice, ministry and spirituality issues.

Deacon Don’s most recent assignment was to Immaculate Conception Parish in East Aurora, NY where he coordinated the Adult Faith Formation program as well as participated in the Salt & Light Ministry in the parish, a ministry to coordinate the social outreach of the parish.  He is also an instructor in the Continuing Education Program at Christ the King Seminary. He regularly gives talks, presentations and retreats to a wide variety of audiences. Deacon Don is also active in prison ministry at Collins Correctional Facility.